My Weekly Fishing Report for this mornings show on CVFM radio “Gone Fishing with Sam Harris”.

With fewer anglers out and about this week braving the
cold conditions in search of a silver tourist most rivers have reported a dip in catches.

For  the Week Ending 20th February catches so far are as follows:

The Tyne is currently at 2ft 8″ and rising. Its running with a bit of sediment in it from the rises during the last few days. Temperature is 38.0’f – it’s cold.

Yesterdays salmon caught on Bywell at 15lb was on the fly. It was a fresh fish (no sea lice) and had been in the system for about a week. Fly used was a yellow pot bellied pig cone (boar bristles at the back with a flash of orange).

Winner of the Junior Malloch Trophy and Bemersyde Junior Trophy Jess England caught 3 springers yesterday on the fly on Hendersyde Beat, River Tweed. Fishing the Cottage Pool, a great pool for springers, she caught all of her 3 fish within its length (150 yards).

Jess is an inspiration to young anglers – she’s been fishing for 8 years for salmon and has caught a staggering 50 salmon up to 18lb. Jess uses her dad’s rod an Orvis shooting star 14ft.  Line  used Airflo Ultra Spey with a multi tip head. Intermediate head, with a fast sinking tip. Fly black and yellow variant. Ketch said “she was not fishing her fly too deep”.

Brian Doran the chairman of the Spey Board provides a deeper insight into salmon migration. Effects on the Spey of the Wild Fisheries Review. The A9 widening project, fish farming, wind farms and smolt migration out at sea and much more in this informative YOUTUBE video produced by Craig Somerville of Angling Active, Stirling.

What’s the Difference between a Parr and a Smolt.

Salmon remain in the river as parr for one to three years before becoming smolts and begin to migrate to the sea, usually in March, April and May. Smolts are distinguished by their bright silvery colour with scales that are easily rubbed off.

It is estimated that only 10% of all salmon eggs survive to this stage.

Female salmon or hen fish can survive spawning and return to sea as Kelts. Male salmon or cock fish usually die when spawning is over.

When the weather is cold fish become less suseptable to swim around and don’t want to come up to the fly. Early spring is about getting the fly down to the fish.

Ian Gordon from SpeyOnLine says “Don’t wade too deep especially after the floods we’ve experienced.  You are more than likely wading over where the fish are”.

Reading the water is important. Look at the pool and target a specific part of the pool where you think a fish would be lying in. Concentrate on deeper parts of the pool.

The Wading Line is relevant and length of cast is important to get depth and speed of fly for where the fish will be lying.

As soon as the water temperature rise fish are likely to be lying in a different part of the pool so tactics will change.

Early season flies recommended by Ross MacDonald Fisheries Development Officer on the River DEE, and creator of the Calvin Shrimp. Flies on 1 1/4″- 2 ” inch tubes of different weights are popular. The Willie Gunn and Black and Yellow, are the most popular. Monkeys, Sunrays and Francis style flies are also early season favourites until the waters warms to over 6 degrees centigrade.

Last weeks fishing show on CVFM radio can be found on podcast by following this link .

If you would like to find out more about fishing in the UK please visit the FishPal website, alternatively give either myself or Tom Carter a call at the FishPal offices on 01573 470612 Monday to Friday 9am-5pm.

Fishing on Meikleour with ghillies Callum and Johnny

Opening day on the Clyde with the Minister for Children and Young People (Aileen Campbell) and SNP MSP for Hamilton Christina McKelvie. 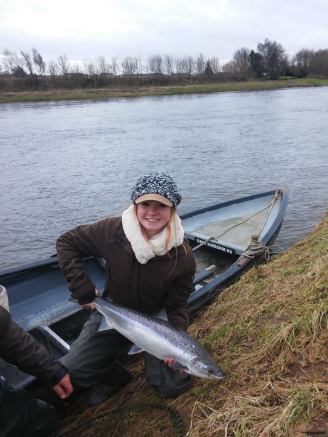 One of three springers for Jess

Fish on for Jess 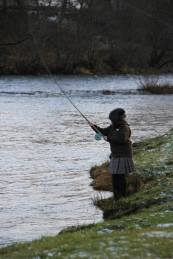 Cast opening day on the Spey

Hywel Morgan introducing the minister for children to fishing 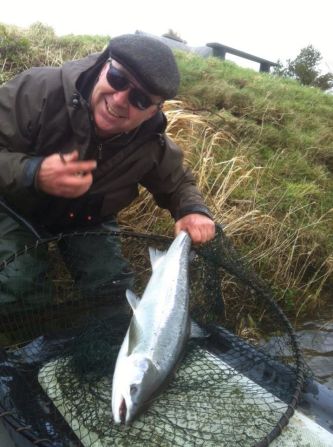