A NEW Fishing Show has been launched and is hosted by respected angling presenter Sam Harris MBE . Sam chats about fishing to regular contributors Andy Rutherford, Don Coe, Les Weller, Anne Woodcock, Dave Hall and Rob Thirlwell. Each week he has a special guest from the industries Rising Stars to Angling Legends. The Saturday Morning Fishing Show is also available on a weekly podcast.

Sam was recently awarded the Honour of the MBE for “Services to Sea Angling” and in recognition for the work he has done for various charities over the last 50 years.

Sam Harris MBE said “Angling is the country’s most popular participation sport and this is the only dedicated radio programme in the UK for anglers, with the latest news about all fishing genres”

I have been asked to contribute and report about salmon fishing in the UK. Here is my report for the week ending 6th February 2016.
Conditions for anglers out fishing this week for salmon have been challenging – extremely windy, everyone in varying degrees has been affected by storm Henry and river heights have been up and down.

The Tyne opened on the 1st February and as reported last week beats below the FishPass have the best chance of catching the first Tyne Spring Salmon.

Bywell Beat reported the first fish at 13lb, a long tail sea licer caught below the Fish Pass on the fly, a gold bodied Willie Gunn, caught by local angler Chris Ray from Crawcrock. When Chris spoke to Gary Hillary, he said he was still shaking.

The river levels on the main river need to drop to fish effectively. Popular flies on the Tyne for the start of the season are Posh Tosh which is a black and yellow fly. If the water is clear and cold use an Ice Maiden (white wing, yellow and blue hackled fly) or a Calvin Shrimp created by Ross Macdonald from the DEE – a red fly with a touch of yellow and orange. Three good flies for the start of the season.

Please note with bank erosion and high rivers during the last 2 months – there could be gravel and depressions/holes in the river bed where you would normally not expect them to be. One of my friends has been onto his club water on the Tyne with a long stick and rope and has plummed the wading lines. There are in places where you would normally get into the river 2 to 5 foot holes – so please be careful, use a wading stick and wear a lifefest. Find Fishing on the Tyne.

River Coquet in Northumberland have had their first salmon a 9lber caught on Wednesday.

River Wear little or no activity with very few anglers out this week – FishWear.

River Tees – “a few fly anglers have been out and the odd fish has been seen” says Len Hird Chairman of BADAC “with its running shoes on”.

Please note BADAC water on the Tees on Eggleston beat, the bottom part of the beat below the Kielder release tunnel has been closed due to bankside erosion from the recent floods – paths are dangerous to anglers.

If your casting a line on the River Tees – Len recommends a large Allys shrimp, flies with long tails and/or purple in their dressing. Posh Tosh (black and yellow fly). Try one of the older patterns – Green Highlander, Jock Scott. In coloured water a Junction Shrimp or a fly with white in its wing will stand out. 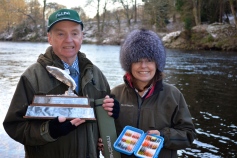 Good opening week on the Dee – despite some dreadful conditions of late the river has landed a few springers – 23 spring salmon so far this week upto 18lbs.

As the great John Ashley Cooper once wrote about the Dee, ‘it is hard to know what better type of water a keen fly fisherman could ask for.’ Despite a couple of difficult seasons, the Dee is a magnet for the dedicated fly fishermen. Latest River Reports.

A lot more kelts on the Dee this year, far more than they have had for a couple of years – one beat has landed a total of 40! in one day. It just shows how resilent salmon are – we had imagined they would have been washed out with the terrible floods.

Flies anglers are using are Posh Tosh – Dee Monkey – Anything with Black and Yellow in the dressing.

TAY
Tay has been affected with rising and falling river levels this week – anglers have still caught fish – 14 salmon up to 18lbs. A cracking 18lber on Meikleour Fishing – landed by their new ghillie Johnny. Check River Levels. 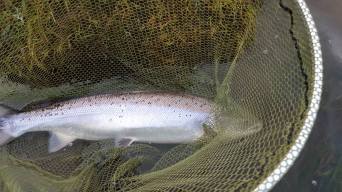 TWEED
Junction have had the first spring fish of the 2016 Tweed season. Congratulations Bob Miller who caught an 8lb spring salmon, netted by head boatman Billy Jack. Fly used Willie Gunn. The river Tweed is still big with colour coming in from the Teviot, making it challenging for rods fishing – Latest Catches.

TEITH
Those of us that drove from Stirling on Monday for the 9am gathering at Ancaster Square in Callander were faced with the heaviest rain we’ve seen since the start of one of the wettest winters we can remember across Scotland and the UK. Topped with “Gaelforce” wind the morning was exactly the opposite of what the Stirling Council Fisheries Team were praying for. 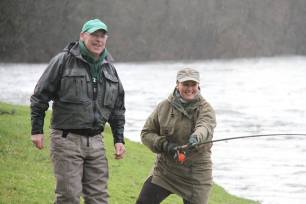 The river was opened by Ray Mears. Ray was filmed chatting about the traditions in salmon fishing and why we should encourage our youth to welcome the Salmon back. Ray also explains the lifecycle of the Atlantic Salmon and the fact that they struggle against all the odds but the “miracle” of their return each year should be understood further and of course celebrated. Angling Active have produced a series of excellent mini videos with Ray – read more.

I wil be speaking from the opening of the River CLYDE with Paul Young and Hywel Morgan. Anglers will be gathering at Popinjay Hotel Rosebank on the Clyde for 9am. A piped band will lead the procession to the river bank and welcome the miracle of salmon returning back to our rivers again this year.

Sam Harris will be chatting to his regular contributors during the show and his guest is Phil Maddox organiser of the Northern Angler Fishing Coarse & Carp show in Manchester.