The girls are Spring Fishing for Salmon on the River Dee 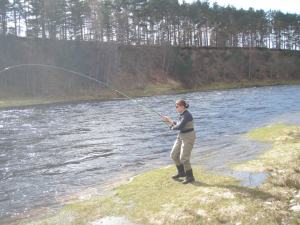 I met my ghillie Jim Cowper in the centre of Aboyne as I’d got lost. Running through my mind I thought ‘this is not a good start 8.45

and lost’. Jim, took me to the upper part of the beat which was only 5 minutes away via car. I’d made notes on Aboyne Water before I had arrived and the upper beat had one of the most productive pools and had been rested (no fishing in Scotland for salmon on Sundays)….so no pressure then! 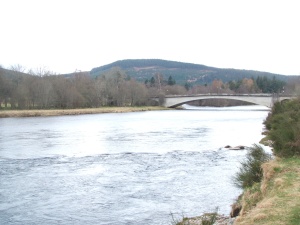 fish throughout the season. Jim pointed out where a 30lb salmon had been landed last week, I thought to myself ‘why is it the beat on the other bank lands a biggie….I can’t cast that far’.

Taking one look at myself wearing a skirt, lost at 8.45 and a female angler on her own, its understandable that he might have thought ‘on dear’ until I opened the boot of my car.  Jim was greeted with the sight of 2 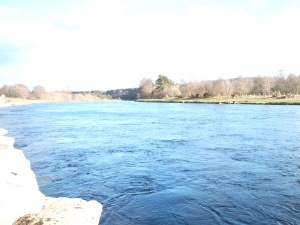 pairs of waders and wading boots, 2 jackets, 2 rods, 3 reels set up with Rio lines and inter changeable tips all sinking densities, 6 fly boxes and I proudly opened one box and said ‘I’ve tied these’. The ‘tackle tart’ had arrived!

Jim left me saying he’d be back in 1 hour (there were 2 Norwegian guys sharing the beat with me that day and he was working between 3 of us). Whilst putting on my

thermals, I thought do they get many women getting changed by the roadside into waders on the Dee, it took me back to my 20’s and scuba diving. (at least waders are easier than neoprene diving suits!)

Do I feel self conscious getting into the water? The answer is yes! Looking round and hoping no one was going to see my first lame attempt at a double spey left shoulder and it was windy. I fished the pool and 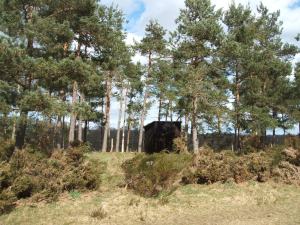 returned later that morning. In total I saw 7 salmon on that stretch, one in particular had the shoulders of a mini dolphin….if only he’d checked out my fly!

Lunch time and I’d still not seen my fellow anglers. They were still fishing! The Dee attracts a considerable amount of experienced Scandinavian and focused anglers from around the world who fish from 8am till 8pm weather and light permitting. I fondly call them ‘salmon junkies’ 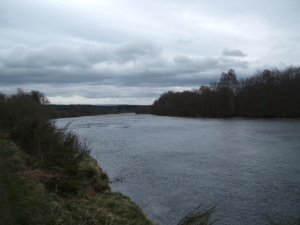 The wind was getting worse! At times I felt that I was going to take off. This is what it must feel like to fish the great Rio Gallegos in Argentina. I had now changed to the Rio Skagit line, my casting improved 110% with the help of the Skagit’s short heavy head and the fast sinking tip guiding my big flies into the salmon zone!

Being able to perform a selection of casts off both shoulders when fishing in windy conditions and the cast becomes dangerous is invaluable and should part of every anglers armory. I was forced to fish one pool with a double spey, with most of my casts finished after I’d collapsed the d loop into a perry poke. The perry poke gives you the chance to abort your spey cast, usually because the anchor point did not achieve the required position. It also helps you to reset the cast when casting heavy flies to a required spot.

By 6 o’clock, tired, the wind had got the better of me, I decided to call it a day. My fellow Norwegian anglers were continuing. Why is it that when you have packed your equipment in your car a gleaming bar of spring salmon about 13lb jumps out of the water next to you. The boys fished this stretch and Aboyne Water had a springer. Between 6ish and 8pm with the right conditions the Dee has a witching hour where you do have a good chance of landing a salmon.

Sitting in the bar at the hotel, listening to anglers, it does give you solace when only one salmon had been caught that day and this gentleman had been fishing the Dee for the last 6 days.

Next day, the sun was shining and the wind was getting worse. Jim the ghillie said he’d rather have a damp, overcast day than this wind. The wind can take it out of you, you are spending energy fighting to get your line up stream on a double spey to have your anchor point blown down stream then you cast is carried into the wind and only the experienced anglers seem to get the line to land where they want it.

By the afternoon I was rotated again and enjoyed the opportunity to fish a section where there were no trees, gorse bushes, rocks and the wind was not howling down this part of the beat. It felt like a manicured heaven. Casting was easier and yes I was still the double spey queen, I was now performing snake rolls and wind permitting snap c’s from the right shoulder. My line was unfolding like a dream, using the Skagit I was able to shoot more line with confidence across the pools. 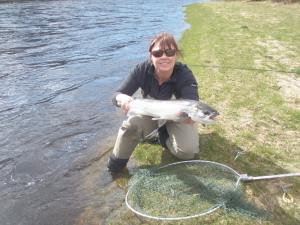 Half way down the pool, nearly on the dangle I thought my line had got stuck! It was the start of 10 minutes of salmon heaven, anticipation and fear of potential loss, the one that got away!

Luckily Jim was there when I played the salmon, I quickly maneuvered into a position below, so he was swimming upstream and fighting my fly to tire him out quickly, he turned and swam across stream taking even more line. Jim’s help and advice whilst I was playing the fish was invaluable. Finally I got his head to the surface and we both realised he was a well mended kelt (this is a salmon that has spawned and has not suffered too much stress or trauma during spawning, inexperienced anglers sometimes confuse them with springers). 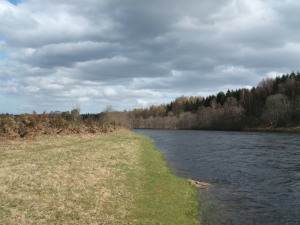 Even though you have landed a fish that won’t go to the beats daily total it was still a beautiful fish of 9lb. My hands were still shaking, you still have the sense of achievement and to be close to a wild fish that has travelled through some of the harshest seas to spawn on the River Dee is still a privilege and should not be treated lightly. I gently placed my salmon holding him upstream, his gills getting much need oxygen, after what seemed a few minutes his fin moved in my hand and he was away. About 30 yards upstream he jumped out the water, which made me smile, I knew he was ok!

The water was now rising and during the afternoon rose 3 feet. Good news for any fish waiting to enter the River Dee system, not so good for anglers looking to catch a springer, as fish don’t take well on rising water. A dropping and clearing river presents the angler with the best chance of catching a salmon.

Last month fellow angler Emily spent 3 days fishing the Lower Blackhall beat on the River Dee with her husband Tony. They experienced different fishing conditions, snow, rain and chocolate brown water. On day 2 Emily caught a 6lb springer, the only one for the beat all week. Tony on day 3 caught a kelt. Catching the elusive springer on any river is something many salmon anglers aspire too. Well done Emily!

Here are my top tips if your going on a salmon fishing trip:

Make sure you take a spare rod, there is nothing worse your rod snaps on the first morning of a 3 day fishing trip. Take a selection of fly lines suitable for all conditions, I use the Rio Spey lines with different sink tips and the Rio Skagit line allowing me to fish in all fishable conditions. Learn to cast off both shoulders, so it won’t spoil your fishing enjoyment,  whatever ever side of the bank you fish on.  More importantly you’ll be casting safely in all wind conditions, book a lesson from a qualified casting instructor on the double handed rod either AAPGAI or GAIA. Take with you flies anglers are using on the water, read the fishing reports from sites such as FishPal or the Salmon Forum, go to the local tackle shop or order them online before you fish. Contact your ghillie/guide, they are the link to you catching a fish. When choosing a salmon beat there is a lot of information available on the internet from websites such as FishPal, Fishing Forums and the Environment Agency. Finally, fishing in the sun and wind remember to drink plenty of fluids and wear a good sunscreen.  On the evening I apply a small amount of Vaseline £1.66 on top of my face and hand cream to dry areas such as around the eyes, lips and

cheeks. Its non-irritant, safe for most skin types and will help retain moisture.

Fishing the Dee for 2 days including travel, food, fishing, tips and accommodation cost me £395.00. I stayed at the highly recommended Tor-na-Coille Hotel at Banchory.

In 2012 there will be a ladies trip to the River Dee for spring salmon, open to experienced female anglers, no tuition provided.  Any ladies interested please contact annefishing@yahoo.co.uk