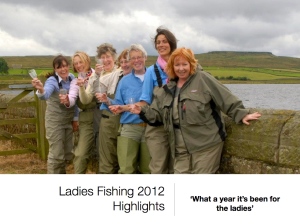 It’s been a busy year for the North East Ladies Fishing Club, with monthly events held during the year for beginners to advanced anglers across all fishing genres. With a year of record rain and widespread flooding – only one event was cancelled.

2012 was the year when the club went global contacted by magazines and TV companies. On a wet Friday in August and an amber weather warning, Jeff Prest from Trout Fisherman Magazine joined the ladies at Hury Reservoir to find out more about the club. The following month Sky Sports Tight Lines spent two days filming the ladies for salmon and trout. Unfortunately on the second day of filming the heavens opened, weather forecasters said it was the worst September storm in 30 years. After braving 2 hours of filming the girls retreated to the newly named camper-van ‘mini-bago’ for hot soup and the end of filming. With the expertise of Sky Sports Andy Ford they were able to produce 8 minutes of film – which was aired when Anne Woodcock was a studio guest 23rd November. It is a real credit to the ladies involved whose personalities made this possible – to see the film – please follow this link

During a year where the UK’s flatlining economy was having a devastating effect on charities – it was encouraging the 4 charity events held by the club were not affected. Thank you to everyone who contributed and gave generously to the following charities Casting For Recovery UK & Ireland and Get Hooked on Fishing. The club has been fund raising for breast cancer charity, Casting For Recovery UK & Ireland for the last three years and has now raised over £7,000 – thank you Ladies.

Ladies Fishing coaches were involved in other angling activities during the year. Witton Under 17 Club (run by Cliff, Anne & Paul) achieved Club Mark status in October –  four club members have been picked for the North East junior talent pathway and one member has been selected for England Youth.

The club working with Gary Hilary, gave an introduction to salmon fishing on the Tyne, including fly dressing and entomology to junior school children with learning difficulties in July – Gary Hilary would like to express his thanks to everyone involved – he said it was a memorable and enjoyable day on Bywell beat.

During National Go Fishing Month, alongside the three events Ladies Fishing organised in the North East, Anne and Paul were invited by Rutland Fly Fishers and asked to write and present the boat, fishing safety session to 88 junior anglers during morning sessions at Rutland Water.

Healthy Eating was highlighted during the year, and the benefits of eating trout – nutritious and sustainably farmed in Britain. Fish filleting was incorporated into summer events, with great results and a notable increase in the number of fish taken by members attending events. Ladies Fishing coaches produced a four week healthy eating, cooking and fishing programme for the West Cornforth Community Project in July with positive results – Club coaches were invited to the centre’s cafe opening in December to see the dishes on the cafe menu and the local community ‘Meals on Wheels’ service.

2012 was also a year of many firsts for all of us – from the first fish to the purchase of your first rod. I hope you enjoy 2012 Ladies Fishing Club highlights

If you would like to join us on one of our days or speak to Ladies Fishing please email annefishing@yahoo.co.uk or contact Anne on 01388 605340

Friday night live on YouTube with @takethat and @robbiewilliams just fabulous thank you @meerkatmusic
The NHS Warrior by Ranald Hutton is now available to buy at fishingmugs.co.uk - all proceeds go to the NHS #captaintommoore The first week of Lockdown I i was chatting with @rossmacdonald70 @theriverdeeteam and we thought let’s do a lockdown fly tying competition for trout and salmon flies. Prizes were generously donated by @caledoniaflies @twinpeakesflyfishing @loop_tackle @fishpal_fishing @fishingtv The competition ran until Easter Monday - the end of the first lockdown date and it got folk of all abilities tying flies including beginners which was great to see. With over 180 entries from across the UK it certainly kept me busy and at one stage wondering how I was going to send these fly images to the judges! The judges unanimously choose Ranalds NHS Warrior as the winner of the salmon fly competition- a beautifully tied fly that captured the spirit of the fly tying community during these worrying times. The wonderful David’ Miller of FishingMugs.co.uk suggested that they add it to their collection of fishing mugs and raise money for the NHS #captaintommoore #nhs #nhsheroes You can now buy it online 💙
Let’s get Scotland fishing. Please produce a video, photos and let’s come together and support our friends in Scotland that can’t go fishing at the moment. Tag the @scotgov @nicolasturgeon @anglingscotland @fishpal_fishing #letsgetscotlandfishing #anglingcommunity #fishingcommunity #fishing #flyfishing
When the only decision is which hat to wear - it’s going to be a good day @caledoniaflies
A treat to see house martins enjoying the fly hatch this afternoon #housemartins #riverwear
On the River Wear this afternoon and have not seen a single angler out fishing 🎣 I did chat to a guy who said he was an angler and said he will be out when they can start again on Wednesday. He had lost track of the days, anyone else doing that? There’s been a few salmon caught on the Tyne and English section of the Tweed. Some nice photos of trout tell. Have you been put off today by the media coverage and photos across social media of anglers in pools side by side. Or are you concentrating on getting back to work and looking forward to a cast after work or on the weekend. Whenever yo get out tight lines. If your out today let us know how you have faired? Anne #fishing #flyfishing #flyfishinglife #fishing🎣
You will be able to buy the NHS Warrior this Thursday from www.fishingmugs.co.uk raising money for the NHS
Finally got appointments for Sophie & Ivan’s inoculations after cancellation due to Covid19. Stressful waiting outside for them as they went on in their own.
Fly tying and watching the FishPal Facebook Live - huge thank you to all my guests that are helping to make a difference during these difficult times 👏👏👏 Btw is that a brush that’s been dyed @gavinbrown3721
Exercise whilst you work and Facebook live. So my feet are peddling away and yes I wear my slippers 🤪🤪🤪 Classy chic 🤪🤪
A beautiful surprise yesterday from a gorgeous friend. I was on the phone to my wonderful, caring and considerate chap when they arrived. I said have you sent me flowers? No - he said they must be from work for your Facebook lives! Gorgeous @gillybate sent them and thank you so much for this lovely thought x
%d bloggers like this: