Jen salmon fishing on the Naver. 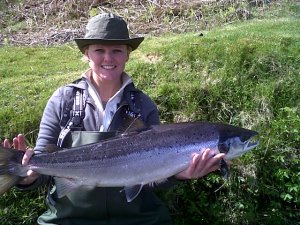 Cliff has been giving Jen casting lessons and last week I was asked if I would go along to one of her lessons with my salmon rods and fly lines. Jen has shared with us her fishing trip to the Naver.

Jen writes….
“I just thought I’d share my tales of the Naver – a great week!….I purchased the Rio AFS kit (and my first reel!) from John Norris’s, but unfortunately there was very little water so I only used it on the first day as the water got lower each day – fingers crossed there will be plenty in time for our trip to the Carron in July.

We were warned by the ghillies on the first day that it was going to be a tough week due to low water – Monday began at 2″ and ended on Saturday at -4″, but the eight of us are a stubborn bunch and fished on regardless.

This is where I get a little sheepish as I don’t like bragging, but I wanted to let you know that all three of the ghillies commented on how they thought my confidence had grown since last year and my casting had improved massively – one said that he would quite happily have thrown me in the river the past couple of years (this is the one that has been known to literally hang on to my shoulders when casting my fly rod!) but this year he thought my casting was great, so many thanks Cliff!

My contribution for the week:

Monday: 11lb – caught on my first line and reel in the first hour of fishing 🙂
Wednesday: 3lb Grilse (my first grilse!)
Saturday: 12.5lb

Saturday’s fish was my largest fresh fish to date and the longest most enjoyable I’ve ever played – it was determined to do everything possible to get away! Luckily I had the company and advice of a great ghillie called Craig, so we got him in the end; even jumping a ditch and chasing a few hundred yards along the banks. (I’ve attached a little pic)

Anyway, back to work with a bump this week, but I’ll be in touch shortly once things have calmed down a little to see if you are available so we can work on that Perry Poke! 🙂

Take care and hopefully speak to you soon

Paul Little recommended John Norris salmon lines, they are being discontinued, so be quick ladies if you want to buy one.